The Town Hall of Hermoupolis, one of the biggest town halls in Modern Greece, an architectural piece of art by the German architect Ernst Ziller. The foundations were laid in 1876 and the building was completed in 1898.

The “Apollon” Municipal Theatre.  It was built in 1864 by the Italian architect Pietro Sampo. Its exterior is simple but the interior parts are characterized by an impressive architectural style imitating Italian and French patterns. 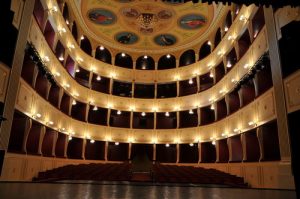 The Industrial Museum of Hermoupolis, in which the visitor can admire a collection of old machinery and tools, actually consisting of more than 300 objects. It is unique collection, considering the standards in Greece, with objects used in the equipment of tanning, mechanics, textile-mills, typography, food-packing and Turkish delight production e. t. c. The collection of these historic tools has begun since 1985. The systematic process of correction and maintenance begun in 1998 and takes place exclusively in Hermoupolis. 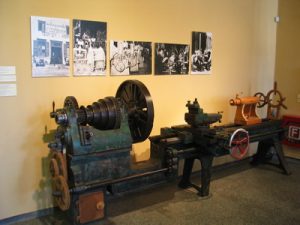 The orthodox temple of Saint Nikolaos, which is located in the beginning of the built-up area of “Vaporia” and its construction was completed in 1905 after 61 years of labor. Imposing and majestic, it is one of the five biggest temples in Greece, and it is admirable by the visitors. In the garden in front of the temple there is the monument of “The Unburied Warrior”, which was the first in Modern Greece and was built to honor the memory of the unknown soldiers of the Greek War of Independence in 1821 and was made by the Tinian sculptor G. Vitalis (1880). The busts of the Rethimni brothers, who were ship owners and great benefactors from the island of Kasos, are found in the very same garden. 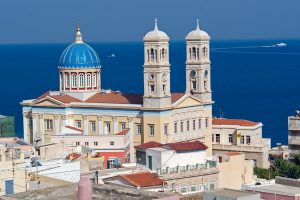 The Ecclesiastical Museum of Hermoupolis, which is housed in the Temple of Saint Nikolaos, while very close to the temple facing the Monument of the Warriors, in the little garden, there is the ecclesiastical bookshop of the Holy Diocese, named “Theognosia”. 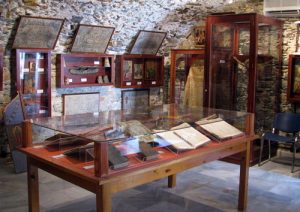 The Museum of Markos Vamvakaris and the bust of the folk music composer from the island of Syros, in the homonymous square. 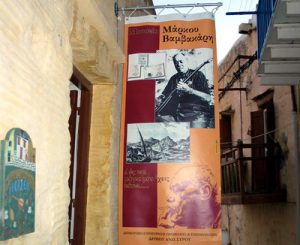 The Miaouli Square, with the statue of Andreas Miaoulis (1889) at its centre and the marble music grand-stand which is carved with representations of Apollo and the Muses.

The Department of the Historical Archive of Hermoupolis, which is housed in a neoclassical building of the 19th century, next to the Town Hall.

The temple of Evangelistria (1829), a catholic parish temple.

The Cycladic Art-Gallery, which is housed in a neoclassical building with domes, and was the first transport center of Modern Greece. It hosts masterpieces of Greek and foreign artists.

The Custom-House and the homonymous square, with the monument of the “Unknown Soldier” and the building of the Yacht Club of Syros.

The monument of the “Unburied Warrior”, made by the Tinian sculptor G. Vitalis to honor the warriors of the Greek Revolution that  took place in 1821, in front of the Temple of Saint Nikolaos.

The Lighthouse, of the 19th century, at the little island of Gaidaros (Didimi). It was the first lighthouse with a rotating mechanism in the Aegean.

The “Vaporia” built-up area, characterized by a genuine neoclassical style. The marvelous mansions with a view of the open sea are there to remind the ancient glory of the island.

The Archaeological Museum of Hermoupolis, where early-Cycladic and byzantine finds are exposed.

The location could not be found.